Half his country may not support his efforts at peace, but Colombian President Juan Manuel Santosnow has a Nobel Peace Prize for pursuing a deal to end the longest-running war in the Americas.

Santos accepted his award Saturday after brokering a deal to stop the fighting in the 50-year conflict with the leftist rebel group Revolutionary Armed Forces of Colombia, better known by its Spanish acronym, FARC. 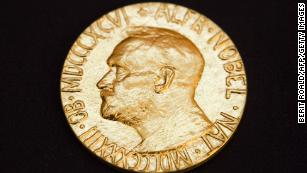 “After six years of serious and often intense, difficult negotiations … this agreement marks the beginning of the dismantling of an army and its conversion into a legal political movement,” he said at the ceremony in Oslo, Norway.
But a path to peace in Colombia’s civil war is still uncertain.

Colombia’s Congress approved the landmark agreement, but it came only after a stunning referendum result in October in which 50.2% of Colombians voted against it. 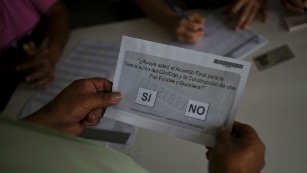 A Colombian receives a ballot before voting in the October referendum.
Santos addressed his country’s polarizing rebuke in his Nobel acceptance speech, calling it “completely unexpected.”
“Like life itself, peace is a process with many surprises,” he said. “(But) I was determined to turn this setback into a chance to develop the widest possible consensus for reaching a new agreement.”
After the plebiscite, the President returned to the negotiating table to incorporate many of the opposition’s objections.
But again, the objectors balked, claiming the fundamentals of the peace accord still condone the atrocities committed by the FARC.

In the more than five decades since it started, the armed group has seized territory, attacked government forces and interfered with political life through high-profile kidnappings. As decades passed, thousands of people were killed. Up to 220,000 died in the insurgency and as many as 5 million people were displaced — more than one out of every 10 Colombians. 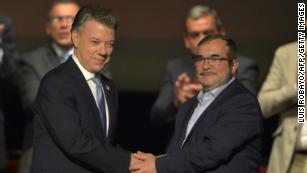 Santos, left, and FARC leader Timoleon Jimenez seal the revised deal.
Santos’ political opposition — led by two former presidents — had proposed terms that would require some members of the guerrilla movement to accept prison sentences for their crimes. But in the end, it was a provision that would not make the final cut.
The President, not willing to suffer another political defeat, chose not to hold another referendum to ratify the reforms.
The rebels signed off on the revised peace deal and now have 150 days to put down their arms.

The end of war?

“Ladies and gentlemen, there is one less war in the world, and it is the war in Colombia,” Santos told the audience Saturday in the Oslo City Hall.
“I have served as a leader in times of war, (and) from my own experience, it is much harder to make peace than to wage war,” he said.
The President deviated from his prepared remarks to pay tribute to the families of those killed in the conflict, and to the victims themselves, including Ingrid Betancourt, who was held hostage by FARC for six years. To a round of applause, Santos asked them to stand and be recognized for their contribution to peace, and for their loss.
But there was a notable absence. FARC leaders who signed off on the deal were not in attendance as the ceremony’s host country, Norway, still considers the group a terrorist organization.
admin2017-02-15T07:08:50+00:00